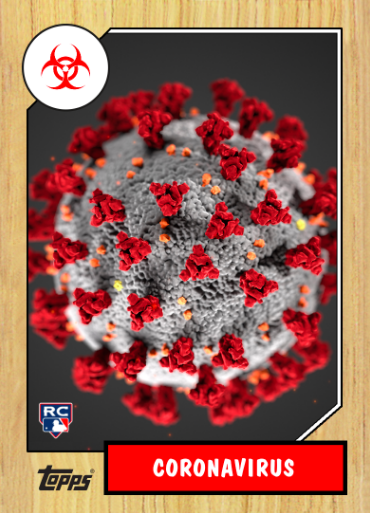 All anyone is able to talk about is the novel coronavirus, COVID-19, so it should come as no surprise that it’s on my mind as well. But the other thing that’s always on my mind is baseball cards. It’s only natural, then, that I would think about how the coronavirus is going to impact the world of sports cards.

It’s clear to me that the effects of coronavirus will permeate the sports card world in several ways. Let’s start with the most obvious: card shows. Shows are neither as prevalent nor as crowded as they were in the 1990s, but in-person shows are still a huge driver of card transactions. Card shows today range from small hotel shows with a few dozen dealers and attendees that barely crack triple digits to huge gatherings with hundreds of dealers and thousands of buyers. One show that falls into the latter category is the Chicago Sports Spectacular. The show is typically held twice a year, and this past weekend was slated to be the spring show. By Thursday, over 20 autograph signers had backed out of the gig. But the show was not canceled, so some vendors began to set up on Thursday in anticipation of the show’s first day on Friday. On Thursday night, the Illinois governor banned events and gatherings with over 1,000 people, so the show was canceled.

Many other smaller shows, such as the Nashville Card Show, were also canceled last weekend, and some smaller shows canceled for future weeks as well. But most of the larger shows issued statements about remaining on the schedule; CSA, the organizers of the Chantilly, VA show, issued a statement noting that one of the largest shows in the country would continue as planned for April 3-5.

Notably absent from all of this has been the National Sports Collectors Convention. The National is scheduled to begin at the end July in Atlantic City, so it’s not like it’s right around the corner. However, this is the time that people typically book flights and make travel arrangements to go. Not even an affirmative statement has been made by the organizers, which could put some people in a holding pattern and result in lower turnout than usual.

Another way the spread of the virus could impact the card market is the stoppage of all major sports indefinitely. Cards — particularly modern cards — rely on player performance to drive sales. If Zion Williamson isn’t playing, he isn’t able to put up big stats, and his rookie cards remain in a state of flux. This could trickle down even to new releases; when Bowman is released at the end of April, there are typically a few players who have begun to break out in spring training and in their minor league seasons, driving demand for the product up; with spring training stopped early and baseball on hold indefinitely, Bowman could see a decline in interest this season — at least until games get back up and running.

The final way the market could be impacted is buyer insecurity. When fear enters the marketplace, typically buyers get nervous and don’t buy. From an anecdotal standpoint, I can tell you first-hand that my eBay and COMC sales are way down. However, I conducted a non-scientific survey that suggests that maybe my concerns over buyer insecurity are overblown. I polled the largest baseball card group on Facebook, which has over 40,000 members. I asked, “Will your online purchasing of baseball cards and memorabilia change in any way due to the coronavirus scare?” The results were encouraging:

No, I anticipate buying the same amount I always do: 67.7%

Yes, I anticipate buying more because there will be good deals to be had: 18.5%

Yes, I anticipate buying less because I am concerned about money: 9.2%

Yes, I anticipate buying less because I am scared of the virus being contained in a package I receive: 4.6%

Perhaps there’s some hope for the card market after all. For now, all we can do is wait.