Whether you collect graded sports or non-sports cards or buy graded cards to resell, few things are more annoying than receiving a slab in the mail and discovering that it’s scratched. An extreme version of this frustration happened to me recently, when I purchased a lot of eight 1989 Fleer Ken Griffey Jr. rookie cards only to discover that each PSA case had extensive scratching and scuffing. As my intent was to resell the cards, I was hoping to clean these cases up so that the next buyer would not be as disappointed as I was.

I had heard of some people using a product called Meguiar’s PlastX to get surface scratches out of slabs. The product is intended for car headlights, but a bottle was cheap enough on Amazon, so I went ahead and ordered it. I was very impressed with the results, enough so that I feel comfortable and confident recommending its use.

Before I go into the step-by-step process, I do want to make a few things clear:

First, I grabbed the bottle and a microfiber cloth. You definitely want to use a soft microfiber cloth or something else very soft like an old rag or t-shirt. Anything else — even a paper towel — could be too abrasive and cause even more scratches.

To get started, I squeezed a small line of the PlastX directly onto the slab. Then I took my microfiber cloth and scrubbed in a small circular motion to work on buffing out the scratches. Between working its way into the plastic and getting absorbed my the cloth, the majority of the PlastX “disappears,” but I wiped away what was left over with the other end of the microfiber cloth. 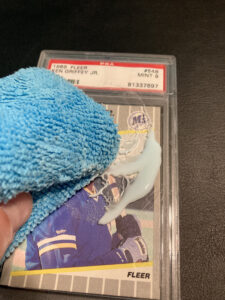 Then I examined the card. From a single application the scratches were much better, but I tried a second and third application and noticed that they got better with each subsequent application. A fourth and fifth application did not help, so it seems there’s a limit to the magic this product is capable of working. Some cards, however, only needed a single treatment and looked good as new.

To show what the product is and is not capable of, I’ve included a before and after below. The card on the left was before any treatment. You can see how scuffed the cases, particularly in the top right, and how some scratches appear deeper than others. On the right you can see what it looked like after two applications. While there are still scratches on the case, most of the shallow ones have gone away. It’s possible with additional applications some of the deeper ones may also start to disappear. 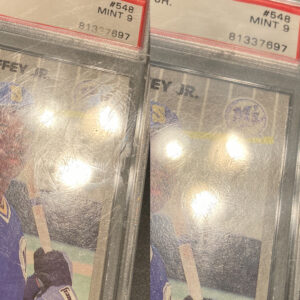 That’s it! There are few things to note about this process. I expected the PlastX to have a horrible and strong chemical smell similar to Goo Gone. To my surprise, the smell is very faint, and even more surprising is that it’s a fairly pleasing smell. I didn’t mind at all.

I was also impressed by how clean the process was. I am a bit of a clean freak but I tried this process out while wearing nicer clothes prior to going out to dinner, and I didn’t come anywhere close to getting anything on me. I didn’t wear gloves, and the remnant PlastX easily washed off my hands with no lingering smell.

One thing I underestimated was the time. For cards that needed repeat applications to the front and back I was spending 10 minutes a card. In my mind this was going to be a pretty quick process but I spent almost an hour working on those 8 cards. Make sure to allow for enough time.