Against the background of canceled Spring Training games, a bitter labor negotiation between players and owners, and the possibility of a delayed Opening Day, baseball fans had one saving grace last week when Topps Series 1 made its annual debut.

The initial release for the 2022 season, Series 1 follows the footprint set by its decades of predecessors, with tons of base cards, fun variations, a slew of inserts and parallels, and some fun hits. A 330-card base set will be matched later this year with another of its size when Series 2 releases, but the excitement is never as palpable as it is when the initial base set releases.

I’m on record as disliking the white borders that many people love, and I was disappointed when Topps brought them back last year, along with a microscopic font for player names. This year’s design, borders and all, is very aesthetically pleasing. The name is readable, for one, but the layout is simple, with clean straight lines and nothing along the sides or on a slant. The star of the show is Rays phenom Wander Franco’s rookie card and all of its variations.

Even as I’ve moved further and further away from collecting modern cards, I opened two jumbos, like I’ve done every year for all of my adult life. Jumbos should, in theory, deliver a complete base set, and each of mine indeed did. While hobby boxes promise one hit, jumbos come with three, with one guaranteed to be an autograph. I didn’t have to wait long to get my autograph hit — a Reverence patch autograph #/10 of Mike Trout. The biggest hit of my life didn’t disappoint, with Trout’s iconic signature hard-signed directly on the card. Amazingly, the second box ALSO had a Reverence auto patch #/10 of Alec Bohm. The odds of pulling just one is 1:14,010 packs, and I got two from the same case. Incredible. 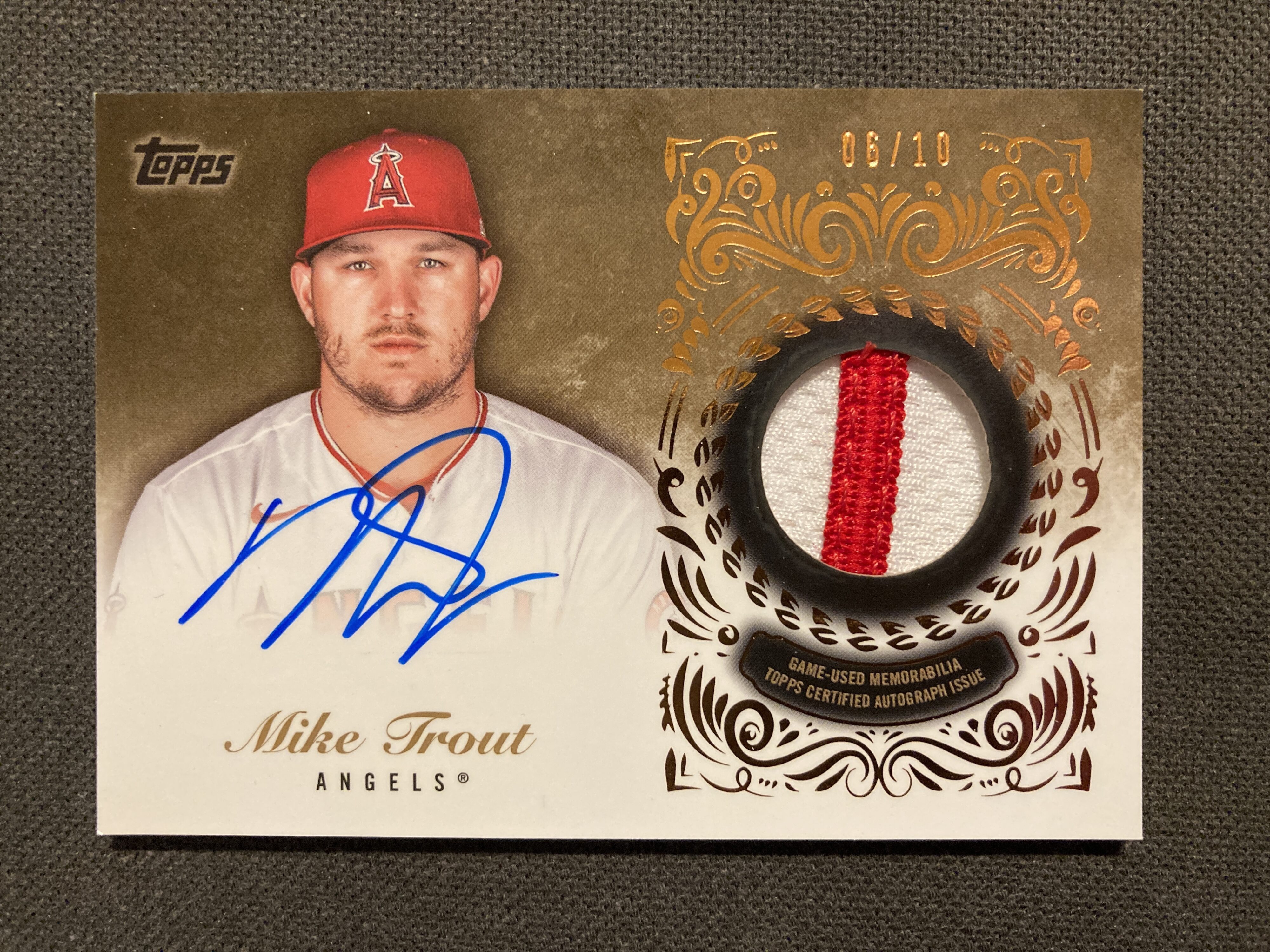 Inserts are, as usual, plentiful. Generation Now and 2021’s Greatest Hits are foil-finished cards highlighting hot young stars and iconic moments from last season, respectively. Flashiest Feet highlights cleats from some of the game’s biggest stars, while Turnin’ Two showcases double play partners. My favorite insert set, Welcome to the Show, pictures superstars through the years in their rookie campaign. But the best part about the insert sets is that Topps chose to not include yet another reprint card line. Finally. Parallels are ubiquitous, too: rainbow foil and gold foil are the most common, and I got just a single gold border in each box.

Somewhat inexplicably, 1987 is featured prominently in the product. It is indeed in keeping with the 35th anniversary Topps has done for the past few years. However, Topps featured the design in 2017 as a 30th anniversary insert set. Doing it again for a 30th felt odd. The design is used for a regular insert as well as a chrome mojo refractor version in the silver packs, which fall 1 per hobby box or 2 per jumbo box.

Set builders and baseball card creatures of habit will love this year’s Series 1. I suggest going with a jumbo — it’s tough to go wrong getting a complete set.