There aren’t many baseball card products that I don’t love. But generally speaking, if I were to make a list of annual releases, Gypsy Queen would rank somewhere towards the bottom. It’s not that there’s anything wrong with it; it’s just not for me. The contrived “fauxback” design, made to look like a pre-war set despite never existing before Topps invented it, has never resonated with me the way sets like Allen and Ginter and Topps 206 have. The magic and tarot themes are things I’ve never quite understood. Then there are the variations, a dizzying array of photo swaps, logo swaps, missing colors, missing text, and so on. It simply isn’t made for a consumer like me, who prefers simple base sets, great photography, and exciting inserts.

But last week, I was in Walmart to get some bloodwork done (there’s a sentence I never thought I’d say!). I arrived too early to check in, so I walked over to the area where sports cards are usually held if flippers haven’t already bought them all out. Lo and behold, there were about 10 blaster boxes   of Gypsy Queen sitting on the shelf. I can’t remember the last time I went into a store and baseball product was available for purchase. The allure was strong, so I couldn’t pass up the opportunity to buy a box and have some fun opening a product without having to wait for it to ship to me. 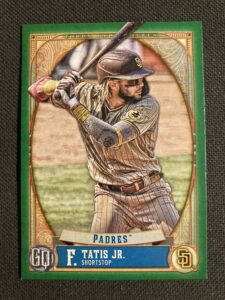 Blaster boxes include 7 packs, each with 7 cards. Each pack contains a retail-exclusive green border parallel. While I liked the green color, I do wish that cards on this kind of stock would have a parallel type other than a colored border. This matte paper type is very prone to chipping and before I even opened a pack I knew to expect that all of the green parallels would be chipped in some way, which indeed they were.

I will admit that I like this year’s design better than any other previous Gypsy Queen design. The card front is not overly complicated, and the player name is large and easy to read at the bottom of photo. Among the standard cards, high numbers over 300 are shortprints. I got one SP in my blaster box of Larry Walker, the Rockies Hall of Famer.

I’ve never really “gotten” how tarot and baseball are supposed to go together, so the Tarot of the Diamond inserts that appear every year aren’t very exciting to me. To be honest, I think I would like it better if there were some explanation on the back of what the tarot card is supposed to mean or correspond to. Since I have virtually no knowledge in that space, and I’m sure I’m not alone, that would be pretty neat. Instead the back of the card is reserved solely for a full bleed color design (also nearly always chipped) and the player name. 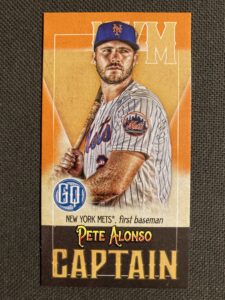 One insert set I did really like was the Captain’s Minis set. Unlike the traditional sets based on real pre-war cards, Gypsy Queen “minis” are standard height and simply narrower side to side. The Captain’s Minis cards feature one of the better players from each team against a bright orange background. Of course, in reality, there hasn’t been an official Captain on an MLB team since David Wright and Adrian Beltre in 2018, but for most of the guys on the checklist, the selection makes sense. I pulled Pete Alonso of the Mets, who is definitely the heart and soul of his team.

All in all, Gypsy Queen simply isn’t a product I enjoy, but that doesn’t mean you won’t enjoy it. It’s a fun and whimsical set if you’re into lots of base card variations and short prints. If it’s up your alley, you could do worse things with $20 than buying a blaster box – should you run across one in the wild like I did.