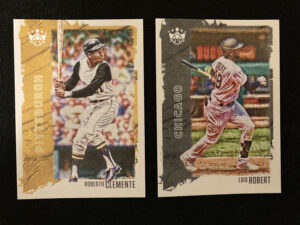 One of Panini’s more affordable annual baseball releases, 2021 Diamond Kings released last month in both hobby and retail formats. Diamond Kings is my favorite Panini product to open, because it combines current stars, rookies, and retired players from previous generations in a single product. Since I’m partial to vintage cards, the retired players lure me in; we’re not talking about just the big names like Babe Ruth and Lou Gehrig, but also, guys like Carl Erskine and Joe Cronin.

Diamond Kings cards originated in the 1980s when artist Dick Perez (who I interviewed here) began painting portraits for one player per team as inserts in Donruss baseball. More recently it has become a standalone product, and though Perez is no longer the artist, the focus remains on artistic renderings of the subjects. The cards have a bumpy, canvas-like quality to them that enhances this aspect.

Blasters contain 35 cards, one of which is a retail-exclusive blue framed parallel. Though not numbered, these cards add a nice wrinkle to an already attractive base set. My three blue framed parallels bridged the three types of players represented in the Diamond Kings set, as I got Ted Williams (retired), Marcell Ozuna (veteran), and Alex Kiriloff (rookie). 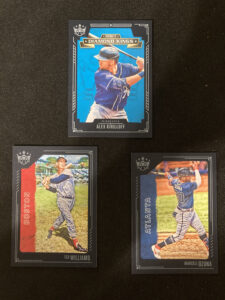 The Kiriloff itself was an insert called Debut Diamond Kings. This was my favorite insert set out of all the inserts I received (and there were a lot of them!). The design, with a variety of brightly-colored solid backgrounds, is reminiscent of the late 80s/early 90s Diamond Kings designs i fell in love with as a kid. But that doesn’t mean the other inserts aren’t also cool. Many of the insert sets lean into the artistic theme of the set, with Legacy Lithographs, Gallery of Stars, Artist’s Palette, and The Art of Hitting all following the concept in naming conventions. Elegance, however, maybe the most art-forward insert set of the bunch. Aficionado features two different renderings of the subject player. The Club is a nice set, though I’m not sure which club the players all belong to; I assumed it was 500 career home runs after I pulled Jim Thome and Ken Griffey Jr., but the Rod Carew I pulled ruined that thought, and the Ichiro I got meant it also wasn’t the Hall of Fame. 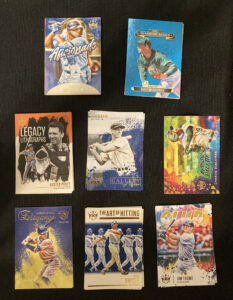 I didn’t get any numbered cards, but I did get some blue artist’s proof parallels, the best of which was a rookie card of young Braves phenom Christian Pache. I was fortunate to pull a dual relic (also unnumbered) of Alejandro Kirk, a young catcher with tremendous upside for the Toronto Blue Jays. Kirk is currently on my fantasy team, and is also currently on the injured list. 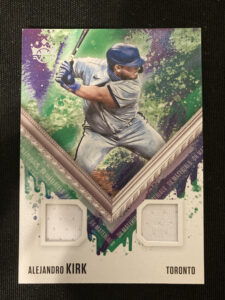 Even though I didn’t get a great return on investment with the boxes in terms of my pulls, Diamond Kings is still a fun rip. To me it’s the most palatable of the unlicensed products Panini puts out, because the cards are so attractive that you forget about the lack of logos. Hobby boxes, which guarantee two hits and three parallels, may be a better way to go for hit-seekers, but if you’re a fan of baseball’s past, present, and future, you’ll enjoy ripping Diamond Kings.