Despite their lack of an MLB license, meaning their cards have airbrushed photos without team logos, Panini does put out some nice baseball cards. I don’t often buy them, but I had heard some hype about the 2021 Absolute baseball product and decided I’d pick up two blaster boxes to give the product a try myself. Blasters contain 5 packs with 8 cards per pack. Two of those 8 cards are green foil parallels exclusive to blaster boxes. Each pack has two inserts (one may be the green foil parallel), and each box has one autograph or memorabilia card. 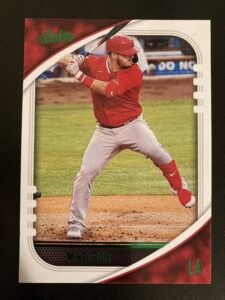 Unlike Diamond Kings, which I reviewed several weeks ago, I have never opened Absolute — at least not since the days when it was produced by Donruss/Playoff. In my mind the set is the company’s most premium “paper”, or non-chromium, offering. I’m not sure if that’s actually true or not, but this thought led to my feeling a little disappointment with the base card design. I like simple designs, but these felt almost too simple. There’s a large photo, a three letter initial for the team city, and the player name. But despite the simplicity, I still felt there were some design flaws that didn’t sit well with me. Why are the two corners with the Absolute logo and team initials so unnecessarily large? Why is the team name bigger than the player name? What’s the deal with the unnecessary design element on the sides of the photo that makes it look like it was ripped out of a spiral-bound notebook?

Despite all of my issues with the design, the saving grace for the base cards is the player selection. As I noted in my review for Diamond Kings, Panini does a good job of integrating retired players into a small base set, including players who don’t turn up very often in other sets. That means not just Ken Griffey Jr. next to Mike Trout, but also Edd Roush next to Dansby Swanson. There are no rookie cards in the base set; instead, they come nearly one per pack in the form of Rookie Class inserts. Prospects inserts also highlight players who aren’t in the majors yet.

The other insert sets also contain a mixture of old and new players. I got a Power insert of Roy Campanella, for example. The green parallels are very subtle, with only the foil lettering changing to green. I pulled some star power with my Mike Trout and Luis Robert parallels, but my favorite was the Sandy Koufax green that I pulled. Koufax is one of the players that I collect and as of this year he can only be found in Panini products, so this was my first card of his this season. 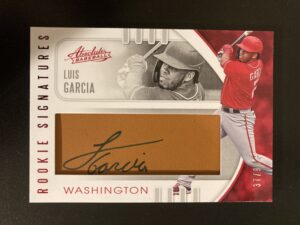 Each blaster box promises one autograph or memorabilia card, which is a nice way to guarantee some value from a configuration that is often boom or bust. My first box yielded a duel relic card of Travis Blankenhorn of the Twins and Zack McKinstry of the Dodgers, numbered to 99. I have yet to figure out what these two players have in common other than the fact that they’re rookies, which doesn’t seem like a strong enough reason to include them both on the same card. My second box had the better hit, an autograph of Nationals rookie Luis Garcia numbered to 99. The card is super thick, and the autograph is on a piece of material that is sort of feels like fake leather.

Though I am not very infatuated with the design add some aspects of the checklist leave me with more questions than answers, it’s hard for me to be down on a product that guarantees 10 parallels and one hit for $19.99. I’m glad I didn’t buy 4 or 6 blasters, but 2 was the right number to have a little fun with.