As expensive as hobby Bowman products were this year, at least they could be found and purchased easily. Retail products, on the other hand, ran out in less than a minute and showed up on the secondary market at 200% to 300% markup. I resigned myself to not opening any Bowman at all for the first time in 15 years (and I used to buy a case of it!).

Then, I lucked into some product. Then some more. And some more. When all was said and done, I opened 3 different configurations of retail Bowman.

The flagship MLB Shop in New York City announced they had Bowman for sale. My friend who lives in Manhattan called to place a phone order; he left a message, and the next day they called him to take down his info. He purchased the maximum – 2 blasters and 6 value packs – with the intent of sending them to me when they arrived at his house. The price was a little high; in fact, after shipping, it came out to be almost as much as if I had purchased the products on ebay.

The next day, I was up particularly early and got a notification on my phone that Target had Bowman Mega Boxes and blaster boxes back in stock. Score! I pounced instantly. Knowing that I had 2 blasters and 6 value packs on the way, I only bought 4 blasters, but I loaded up and got the maximum 6 Mega Boxes. 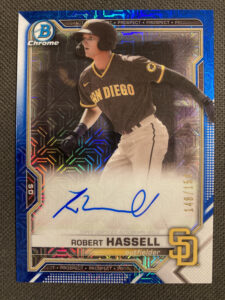 Within the span of a few days, all of my products showed up. The first to get to me were the Mega Boxes. As usual, these contain standard Bowman packs that do not have any parallels or refractors, but each box has 2 packs of special “mojo refractor” cards. While I didn’t get a base of Blaze Jordan, who’s this year’s top prospect in Bowman, I did get last year’s top chase in Jasson Dominguez. I did, however, get two Futurist inserts of Blaze Jordan, and one was a refractor numbered to 199. I was lucky enough to not only get an autograph, but a parallel, to boot: a blue mojo refractor #/150 of Robert Hassell.

My value packs were confusing at first, but an enjoyable rip nonetheless. In the past, value packs have had two standard packs and a single 5-card pack of camo parallels. When I opened the outer wrapping of the value pack, there was no camo pack to be found. I opened the first “12 card” pack to find that it contained 15 cards, including 3 camo parallels in the middle of the pack. The other pack had the remaining 2 camos. I got a paper auto of White Sox prospect Will Kincanon in one of my value packs. I also got a few chrome refractors, but nothing to write home about. Camos are often my favorite Bowman parallel, and I was able to complete the set last year, but didn’t get enough to make a run at it this year. The best one I got was of Rangers prospect Maximo Acosta.

My first blaster yielded an autograph: a 1st Bowman auto of Indians prospect Jose Tena. In subsequent blasters I got a blue paper parallel of Ryan Mountcastle and a green shimmer chrome refractor of Max Meyer.

Overall I didn’t get a ton of hits, but I did get the thrill of opening Bowman as I do every year. Bowman isn’t really about the quick value for me; I like to stick cards aside and dig through boxes years later to find the big name rookies. In whatever format it may be, if you find Bowman, pick some up. Whether you open it or save it, it’s a good long-term investment.