Big League Sports & Pokemon Cards opened in 1992 and has been voted the nation’s best card store for 2 consecutive years (By Krause Publication, The National Football League and others).

Big League Sports & Pokemon Cards is owned and operated by Alan Narz, who is very proactive in the hobby industry.

A consultant to the Topps Company, the NFL, MLB, Alan is the author of over 100 industry articles published by Krause Publications.

In 2005, Alan was named One of the sports collectible industry’s 20 Most Influential People of the Past 20 Years by the official Industry Trade Conference, also included on the list were the founder of eBay, Topps, Upper Deck, PSA, etc.

Alan is the listed inventor of the very popular Topps Rip-Card. Alan calls this his favorite invention of all time and is proud to have been featured on an Allen & Ginter Mini Card.

Alan is also known for his role as the Topps TV “Ripmaster”, and was featured on a card which was inserted in 1 out of every 5 cases of 2008 Topps Finest Baseball.

Alan developed the very popular Retailing for Success conference, which has been attended by several hundred card stores since 1998. 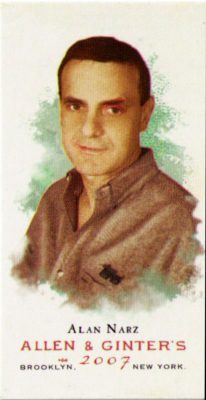 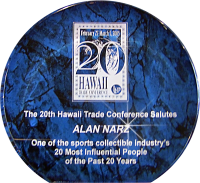 (in the Casselberry Square Shopping Center behind Buffalo Wild Wings)