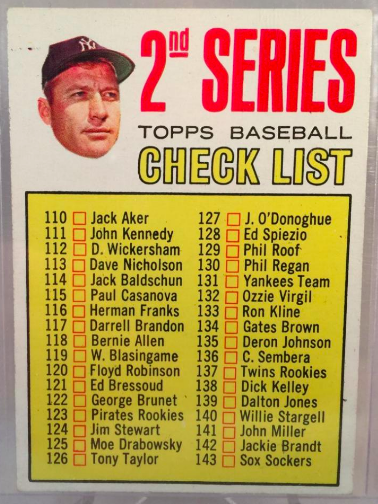 Last week, I wrote about ten pre-war cards you could get for under $10 each in order to start your collection off right. This week, I’ll be doing the same for vintage cards, followed by modern cards next week. For the purposes of this series, “vintage” will run until 1980, with modern containing all this from 1981 on. As was the case with last week, finding some of these cards under $10 may require some determination as well as flexibility on condition.

1948-1949 Leaf #97 Marty Marion: I’ll be honest here right off the bat: it won’t be easy finding this one for $10, but if you wait long enough you’ll luck into one eventually, or you can save $5-10 on a card lower in this list and buy this one for “full” price. I think a card from this issue, one of the most important early post-war sets, is a must in any collection, and rather than a common, Marion ought to be your guy. Though not a Hall of Famer, “Slats” was thw 1944 wartime MVP in the National League, an 8-time all star, and 3-time World Series Champion. He also managed teams for 6 years in the 1950s. The blue sky/green grass background with Marion’s red jersey in the foreground make this a visually compelling card as well. 1958 Topps #476 Stan Musial: It’s usually the case that All Star cards don’t sell for as much as a player’s standard issue from that set. But in this case, Musial didn’t have a standard Topps issue in 1958 — or any year prior to that, for that matter. Musial had been a Bowman signee until 1953, and didn’t surface with Topps until five years later. That makes this the first Topps card of one of the greatest hitters to ever play baseball, and it just so happens to have been released the season in which he joined the 3,000 hit club. If that isn’t enticing enough, maybe the jovial design and bright blue background do it for you. You can pretty frequently find this one in low or even mid-grade at this price point. 1965 Topps #8 Sandy Koufax/Don Drysdale NL ERA Leaders: In 1966 and later, these league leader cards are horizontal, and I’m just not a fan of horizontal cards in a mostly vertical set. Later leaders cards also tend to have 3, and sometimes 4, people on them, crowding the field of vision and making the images smaller. This leader card is perfect – two teammates, two Hall of Famers, two guys wearing a cap the same color as the card’s border. This is a beauty. 1966 Topps Rub-Offs Pete Rose: Cards of Charlie Hustle, especially earlier in his career, still hold value despite his lack of Hall of Fame enshrinement. While the rub-offs don’t strike a chord with everyone given that the “strong side” of the image is reversed, Rose’s example works well for me and is my favorite in the set. The bright red of his sleeves and cap bill are much more interesting than the standard blues and blacks of most other players’ caps and jerseys, and his short name doesn’t hurt to read backwards as much as, say, Bob Aspromonte. 1967 Topps #103 Mickey Mantle Checklist: I know, I know — checklists are usually pretty boring. But the 1967 set incorporated floating heads of some big stars, including this card with Mantle’s mug in the top left. To make things more fun, there are two variations of this card: one in which card #170 is noted as “D McAuliffe” without a period, and another with a period present after the D. Even unchecked, these cards are fairly abundant and cheap to acquire, and just like that, you’ve got a cheap Mantle. 1968 Topps Game Hank Aaron: I’m not a huge fan of the ’68 Game set because there’s nothing on the back and the cards are all basically the same except for the photos, with no biographical information or statistics to be found. This card is an exception, though. Unlike the set’s Mantle, the facsimile signature actually looks like Aaron’s; unlike the Willie Mays, the signature is wholly legible and not placed on a black background for some inexplicable reason. The best part about these cards is that you don’t have to worry about soft corners. 1971 Topps #380 Ted Williams: The Splendid Splinter doesn’t have any playing-days cards that would fall into this category, so going the manager route is the best way to get a card of the best hitter who ever lived in your collection. Teddy Ballgame has four cards as a manager, and they’re all fairly similarly-priced, but the 1971 issue is the only one on which he looks happy to be there. 1973 Topps #473 Hank Aaron All-Time Leaders: You could go with card #1 from this set, which includes Aaron along with Babe Ruth and Willie Mays as the all-time home run leaders. Or you could go with Hank’s 1972 In Action card if you want something in color. But the real reason this card is awesome is because it anoints Aaron as the all-time career total base leader, a title he still holds today and will likely hold for all of time. Hammerin’ Hank finished with 6,856 total bases, more than 700 more than Stan Musial in second place. Barry Bonds has come closest in recent years, and even with all of his homers and walks, still fell nearly 900 total bases short. 1973 Topps #50 Roberto Clemente: This is Clemente’s final regular-issue Topps card before his tragic death in December, 1973. This card, like the 1958 Musial, also comes from the year Clemente reached the 3,000 hit mark. It’s sort of hard for me to believe that any card of Clemente’s should be under $10, but you can track this one down at that price with some regularity — for now. 1974 Topps #473 World Series Game 2 (Willie Mays): The Say Hey Kid retired in 1973, so he didn’t have a regular card in 1974 Topps. But, in game 2 of the 1973 World Series, Mays got his last career hit: an RBI single off future Hall of Famer Rollie Fingers that broke a 7-7 tie. This World Series highlight card commemorates that, which makes this Willie’s final regular-issue Topps card. I prefer this to his final standard card in 1973, because it’s weird seeing Mays as a Met rather than a Giant. He’s not so obviously in blue and orange in this shot, while the Mets jersey is in full view on the 1973 card.