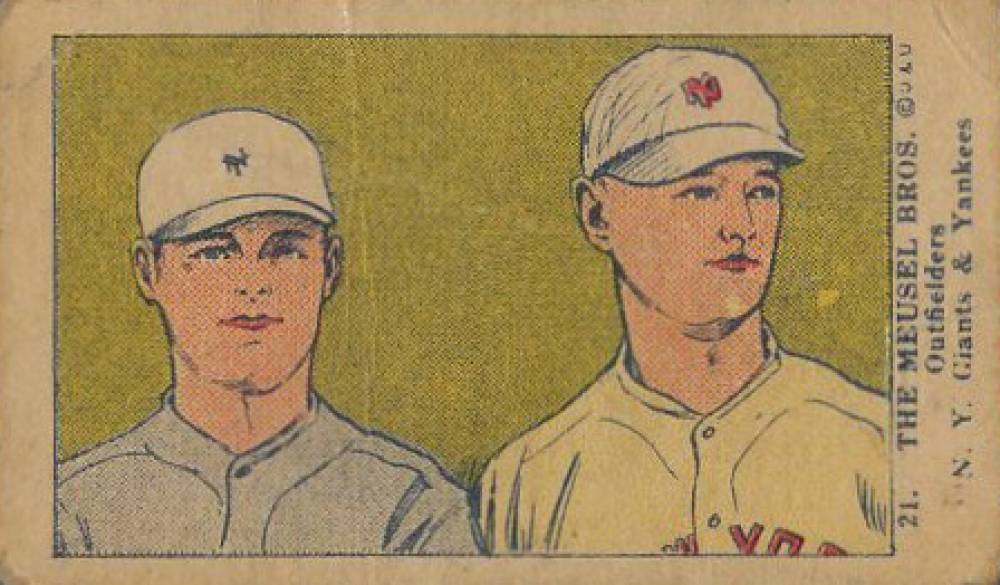 Collecting on a budget can be a difficult but rewarding experience. To help in your journey, I’ve put together a list of ten pre-war cards you can buy for around ten bucks each. Doing so may require a little tenacity and determination, as most buy-it-now prices will be higher, but keeping an eye out for good deals and off-grade examples will allow you to build a great pre-war starter collection at a fraction of the price. Next week I’ll do the same for vintage cards, followed by modern cards the week after.

1921 Exhibits “James H. Johnson”: This name is in quotes because despite its very authoritative presence on the card, the player pictured is actually Jimmy Johnston. Johnston was sort of a pre-war version of utility man Ben Zobrist; in his career, Johnston logged 448 games at 3B, 243 at 2B, 178 at SS, 165 in RF, 130 in CF, 77 in LF, and 49 at 1B. Exhibit cards from the 1950s and 1960s are ubiquitous enough that they’re usually recognizable to collectors, so being able to pull out one from decades earlier with a very serious-looking man on it is a pretty neat addition for your collection. 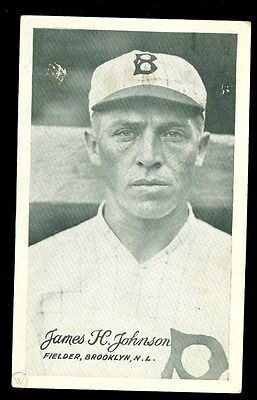 1923 W515 Meusel Brothers: Strip cards are one of the more affordable ways to collect pre-war items, but they’re usually pretty ugly. The earlier sets contain artist renditions instead of photographs. If you’re going to subject yourself to looking at one, it might as well be an interesting one. This card features Bob Meusel, who was the 1925 American League home run and RBI leader, along with his brother, Irish. The Meusels combined for 5 World Series victories, so this little card packs a powerful punch. 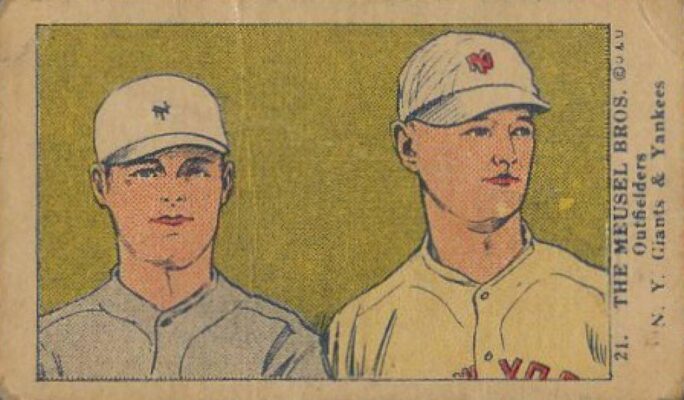 1931 W517 George “High Pockets” Kelly: W517s are technically strip cards, but unlike normal strip cards, they are actually larger than a typical card and look more like photographs. Rarely will you find a pre-war Hall of Famer under $10. Fortunately for you, Kelly is barely a Hall of Famer. Elected by the Veterans Committee in the early 70s as part of a rash of undeserving players selected by their former teammates for enshrinement, Kelly holds the distinction of having been called the “worst player in the Hall of Fame” by the famous Bill James, which is a pretty neat conversation starter if you have a card of his. (Sure beats having a card of the second-worst Hall of Famer.) Plus, his nickname was High Pockets – what more could you want? 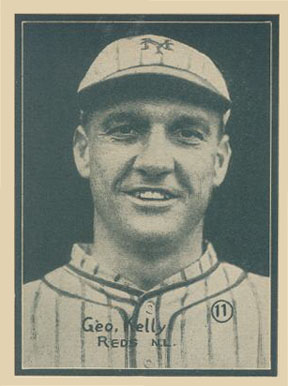 1933 Goudey Lon Warneke: Though not a Hall of Famer, Warneke (named Lonnie on this card) was one of the best pitchers of his era, appearing in 5 All Star Games, hurling a no-hitter, and leading the league in wins and ERA in 1932 en route to a career 192-121 record with a 3.18 ERA. Beyond picking up a card of a forgotten star of a bygone era, this card is just beautiful; the orange-to-yellow gradient of the sun-kissed sky against the bright green grass shows well in any condition. 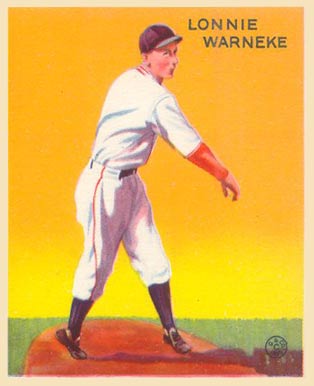 1934 Batter Up: There are a lot of Hall of Famers and stars in this set that you’re unlikely to find for under $10, but if you keep an eye out, you’re bound to find a lower-grade card of any number of players around that price point. These cards were the precursors to the 1964 Topps Stand-Ups, and though the Batter Ups (Batters Up?) don’t have color, they’re absolutely stunning when you consider the uniqueness of these cards from nearly 9 decades ago. 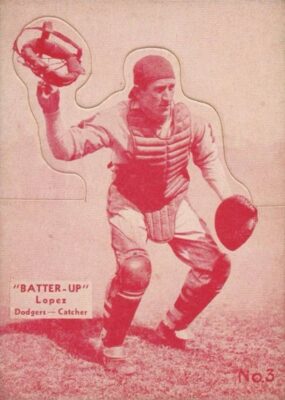 1934 Diamond Stars Wally Berger: The Diamond Stars set contains so many cards with wonderful colors, and I love the bright reds and yellows on Berger’s card. Berger was one of the premier sluggers of the early 1930s, and his 38 home runs as a rookie in 1930 stood as a record until Mark McGwire broke it 57 years later in 1987. Berger made 4 straight All-Star Game appearances and received MVP votes in 5 consecutive years before a shoulder injury derailed his career. 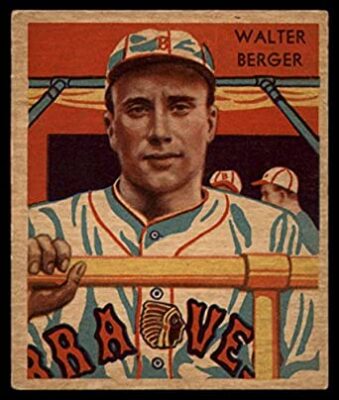 1935 Diamond Matchbook HOFer: Take your pick of guys like Casey Stengel, Al Lopez, Charlie Gehringer, Gabby Hartnett, Waite Hoyt, and Paul Waner — all Hall of Famers, all for $10 or less. This issue is one of my favorites to pick up because it’s an easy way to get a cheap playing-days item of a star. Of course, if you’re a traditionalist about what a “card” is (I’m not) you may have some qualms about this. But these are bona fide issues in my opinion, complete with a photo of the player and a biography.

1936 R313 National Chicle Premiums Lefty Grove: Here, like with the Diamond Matchbooks, you have to have a liberal understanding of the term “baseball card,” as these are more like small photographs. But similar to the matchbooks, you can pick up a variety of Hall of Famers for less than $10. The best of the bargain bunch, in my opinion, is Lefty Grove, a 300-game winner from the 20s and 30s who still ranks 6th all time in career WAR for pitchers. (Note: The one pictured below was in Jefferson Burdick’s collection.) 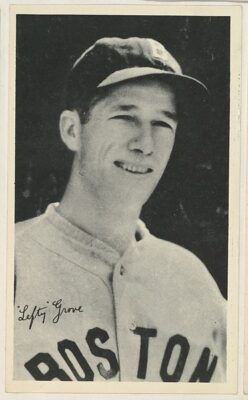 1936 S&S Game Mel Ott: Ott is one of the greatest sluggers to ever play the game but is frequently forgotten despite playing his entire career for the Giants, one of the more popular teams in baseball history. I’m usually not a huge fan of game cards because they either have only a photo, or they use generic art. The S&S release includes a photo along with biographical information, making this feel more like a traditional card than most. 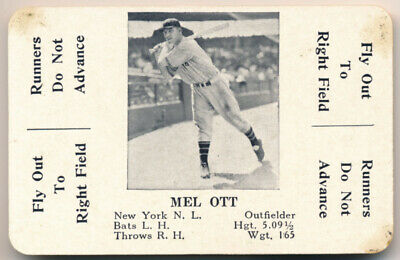 1939 Play Ball Dutch Leonard: Similar to the aforementioned Warneke, Leonard is not a Hall of Famer but was a premier pitcher of his era, making six all-star teams and winning 191 career games. He is also tied to history in the year of this card: in 1939, he pitched a complete game against the Yankees in the first game of a doubleheader. Following the game, Lou Gehrig gave his speech proclaiming himself as “the luckiest man on the face of the earth.” 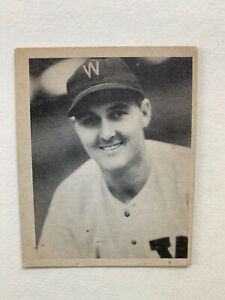