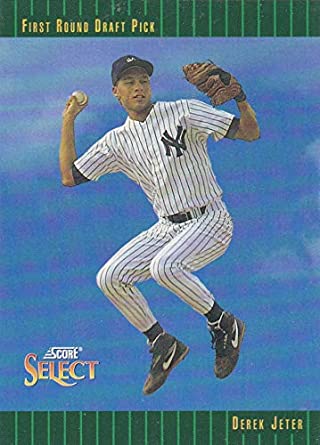 Last week, I discussed ten vintage cards you could add to your collection for under $10 each. The week before, I did the same for pre-war cards. This week, I’ll round out the discussion with modern cards. For our purposes, modern will consist of post-1980 issues. Unlike the previous two weeks, you should be able to nab all of these in nice condition at the price point.

1982 Fleer Cal Ripken Jr.: Ripken is one of the most recognizable figures in the last 4 decades of the sport and is still active within the game. His Topps and Topps Traded rookies don’t meet the $10 cutoff, but Donruss and Fleer do. I prefer the Fleer because it’s the only one of the four rookies to have an action shot on the card. 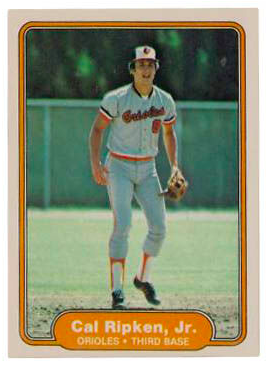 1985 Topps Mark McGwire: In 1998 I took $100 and invested in this card. It’s safe to say my investment didn’t do so well (I do still have the card, though). But there are worse ways to spend $10 than on one of the most iconic cards in the hobby and the hottest card of the late 90s. This card increased in value over this past summer, and if Big Mac ever makes the Hall of Fame where he belongs, his rookie will shoot upwards again. 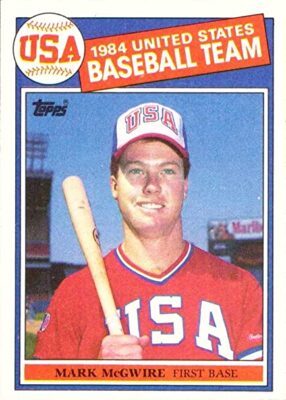 1989 Fleer Ken Griffey Jr.: The Kid’s ‘89 Upper Deck rookie is one of the most recognizable cards of all time and has increased a good deal in value over the past few months. His other major rookies, including the Fleer, Donruss, Bowman, and Topps Traded, can all be had for under $10 each. I prefer the Fleer to the others; the Donruss design is one of my least favorites, I don’t like that the Topps card is from Traded rather than the regular set, and the Bowman is an awkward size to store. That said, you can’t go wrong with any of the four. 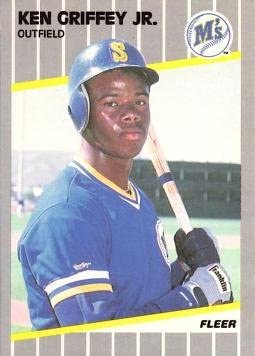 1989 Fleer Bill Ripken Black Box: I never thought I’d have two cards from 1989 Fleer on this list — or a Billy Ripken card, either. The original error version of this card is so famous that non-collectors know it and The Simpsons parodied it. You can’t grab that one under $10, but the Black Box version is plentiful and easy to obtain. 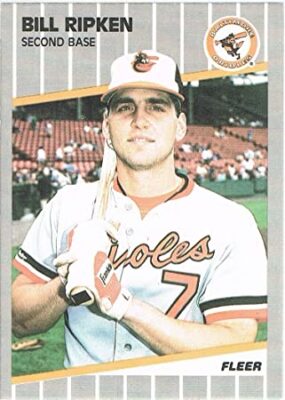 1993 Score Select Derek Jeter: The 1993 SP is the most iconic rookie of The Captain, but this one has the best photo. Jeter has tons of rookies, most of them at or above $10. This issue, from a set held in lower regard than the others, represents a bargain, and this card is the only one of Jeter’s rookies to feature him posed as if turning one of his signature double plays mid-air. Plus, with so many sneaker collectors coming over to the baseball card market, having the Nike swooshes feature so prominently on the card certainly won’t hurt its value moving forward. 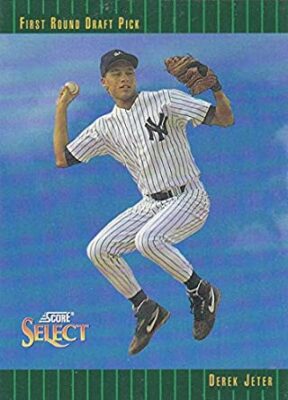 1993 SP Chipper Jones: The Jeter rookie is so clearly the standout card from this set that people overlook the Chipper card. No, it’s not his “true” rookie, but that card features him in his high school uniform. This is the second-best card of one of the most desirable modern sets, and a great card of — apologies to Pete Rose — the best switch hitter since Mickey Mantle. 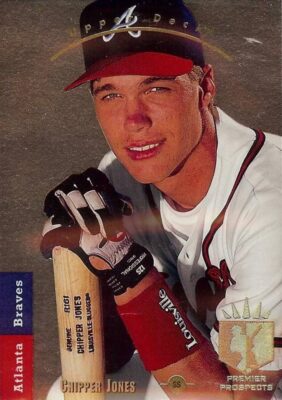 2001 Donruss The Rookies Ichiro Suzuki: Ichiro is one of the greatest hitters who ever lived and a surefire Hall-of-Famer. I feel his rookies are generally undervalued — especially when compared to fellow rookie classmate and future HOFer Albert Pujols. This card in particular is woefully cheap; the image is a great one, and Donruss’s “The Rookies” branded cards had been staples in the industry for years. With Pujols’s card in the same set going for around six times more than Ichiro’s, this is a great addition to your collection. 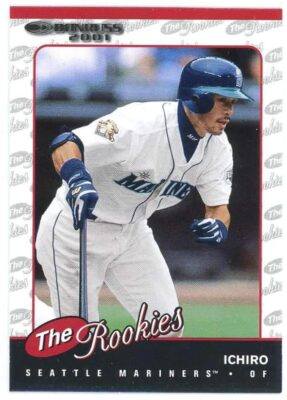 2010 Topps Chrome Refractor Stephen Strasburg: Maybe it’s due to not living up to the hype the industry created for him upon his arrival, but the 2019 World Series MVP is on a Hall of Fame trajectory. His injury this weekend may end up wiping out his 2020, but at worst, he’ll end his age 31 season with a 112-59 record along with an ERA of 3.19 and more than 1600 strikeouts. To get a refractor rookie from the flagship Chrome product of any star under $10 is a pretty good deal in this market; a potential future HOFer is even more impressive. 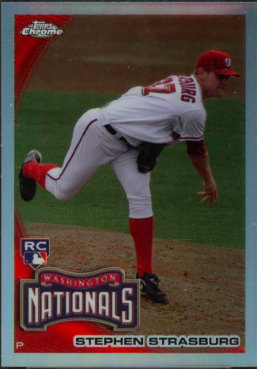 2011 Bowman Chrome Prospects Bryce Harper: Like Strasburg before him, Harper failed to live up to the billing of Greatest Player on Earth. Like Strasburg, he’s on a Hall of Fame path and doesn’t seem to be letting up. He’ll likely end his 2020 age-27 campaign with more than 225 home runs, over 1100 hits, a career OPS somewhere around .900, an MVP, and a Rookie of the Year. Once upon a time, this card was a $40 card — the Luis Robert and Jasson Dominguez of its time. There’s a good chance it could return there as people put their biases aside and see Harper for the player he is. 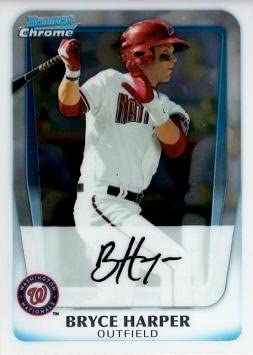 2012 Topps Gold Futures Mike Trout: Cards of the best player in baseball have been skyrocketing, particularly 2012 issues as people have been priced out of his earlier cards. You can’t touch his regular issued stuff for less than $10 but for some reason, this insert is still available at that price point (for now). The black-bordered design makes it condition sensitive, and I have a feeling this would be a nice investment as well as a cool addition to your collection. 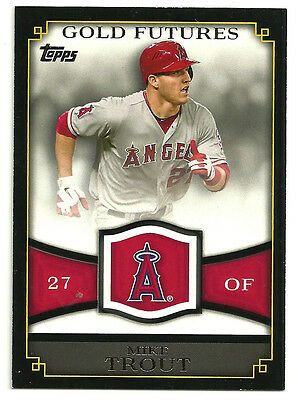