This past weekend, the Astros and Nationals faced off in their first meeting since the 2019 World Series. The Nationals have since sold off much of their star power, while the Astros are still very much in the hunt for this year’s American League pennant.

While stars like Max Scherzer and Trea Turner have been jettisoned, one superstar remains in Washington: Juan Soto. Soto is one of the game’s best players, and he is a hobby darling, with his rookie cards and autographs routinely selling extremely strongly. His counterpart in Houston, Yordan Alvarez, is another young stud hitter. Unlike Soto, however, Yordan’s cards sell for a much more reasonable amount.

The disparity may appear even more glaring when considering the stats. Soto got a nice head start on Alvarez, but look at this comparison through their first 260 games of their career. 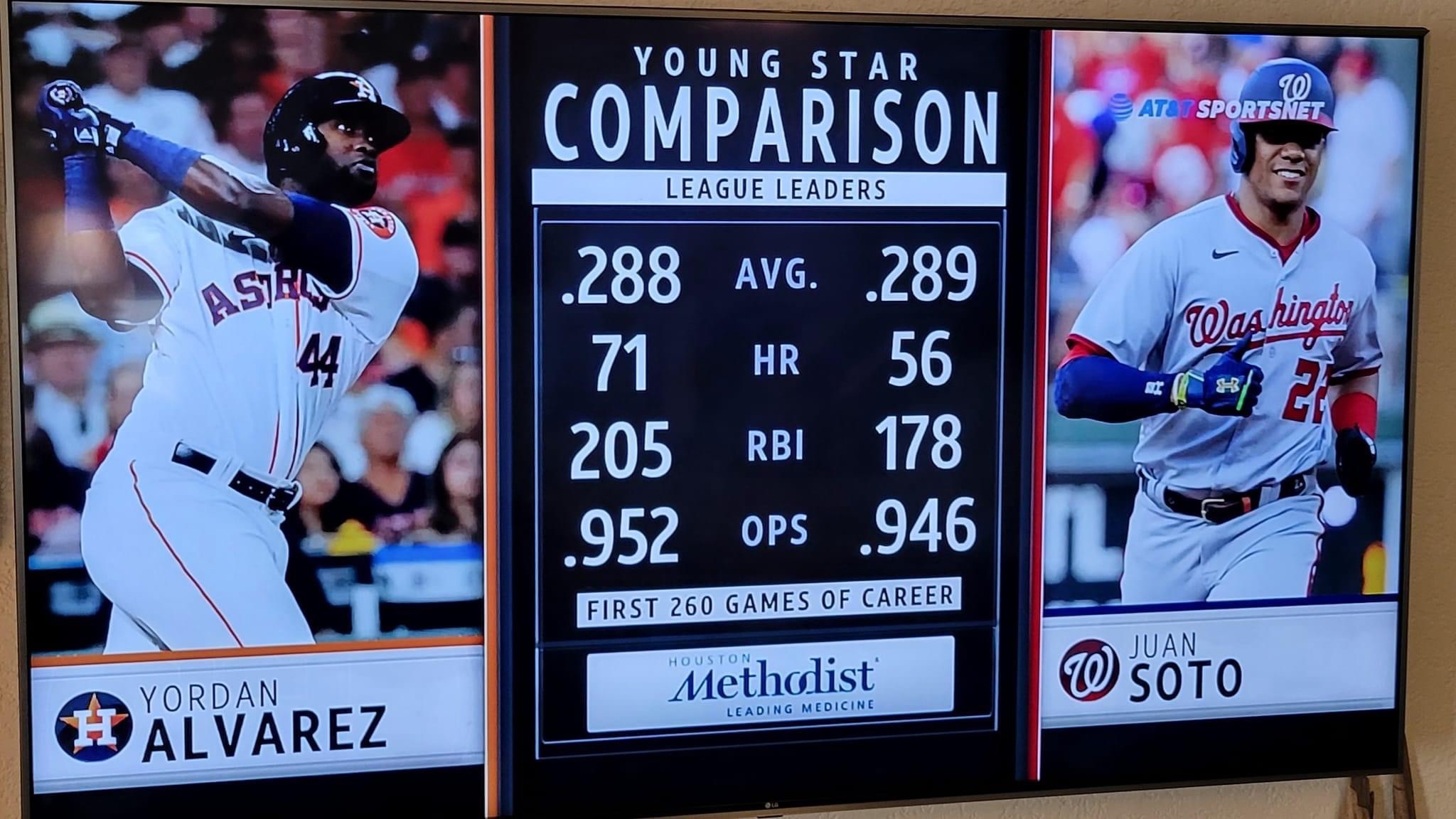 In a Facebook group I’m in, this graphic kickstarted a discussion of how Juan Soto is overrated in the hobby and Yordan Alvarez is underrated. At the very least, some people argued, their sales prices should be close to each other.

I actually do agree that Alvarez is somewhat undervalued. Alvarez has played just two full seasons in his career, and has already racked up a nice amount of counting statistics along with some hardware — the 2021 ALCS MVP and the 2019 AL Rookie of the Year. But there are several things working to his disadvantage. The first is the negative feelings around his team following their cheating scandal. Many fans do not like the Astros and do not trust that their players are achieving any statistics without cheating. Additionally, Alvarez is primarily a designated hitter, which is a position that (except for David Ortiz) does not historically sell well. These two things in tandem do depress Yordan’s prices a bit, though I don’t think they are severely under what they should be.

They are, however, well below Soto’s sales prices. So what gives? The answer here is really straightforward: age.

Yordan debuted in the big leagues at the young age of 22. He did not play a full season, then missed most of the already-shortened 2020 season, meaning he has just one full season under his belt going into his age-25 season. And Soto? Well, last year was his age-22 season — the same age Yordan was when he debuted in 2019 — and all Soto had done by that age was hit 98 home runs and put up a .301/.432/.550 slash line over 2003 plate appearances. Now in his age-23 season, Soto is two years younger than Alvarez, and yet has better stats for his career already. Put simply, Yordan has less time in his career to put up an argument for top anything of all time; Soto is so young he could potentially be top everything of all time.

Yordan Alvarez seems like a good value buy. He already has some accolades, and he’s young enough to put up some big numbers in his career. But comparing his numbers to Soto, who got a head start on Yordan AND is still younger, is a folly. Soto’s values should absolutely be much higher than Alvarez’s.