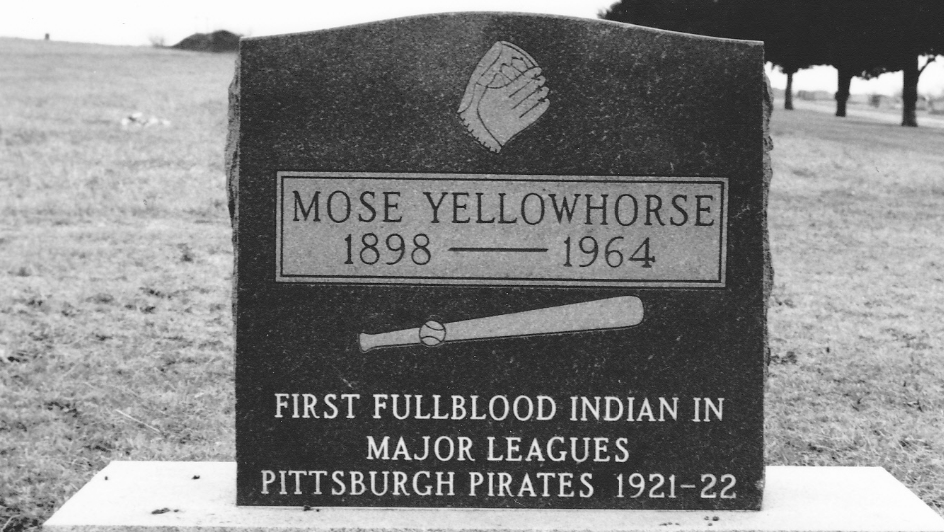 The first Major League Baseball player with acknowledged Native American blood was an outfielder named Louis Sockalexis. Due to his struggles with alcoholism, Sockalexis played in just 94 games across 3 seasons with the Cleveland Spiders from 1897-1899. Though rumor (and the team’s official account) has it that Sockalexis was the inspiration behind the team name of the Indians, most historians have discredited this story as fiction.

Due to the time in which he played and his brief career, no cards exist of Sockalexis. There is an 1898 Cameo Pepsin Gum pin of him, an item from the only national release over a 13-year period from 1890 to 1903. To say these pins come up for sale infrequently is an exaggeration; they are almost never seen.

The player recognized as the first full-blooded Native American, however, was a pitcher named Moses Yellow Horse. Sometimes referred to by “Chief” and other times with the last name Yellowhorse, he pitched both seasons of his big league career with the Pirates in 1921 and 1922.

As luck would have it, the last of those seasons saw a major card release: 1922 Exhibits. Like the later Exhibits issues, these were black-and-white postcard-sized cards that are generally fairly affordable. A PSA 4 sold earlier this month for $395. While that’s more than a common player would typically sell for, I see it as an incredibly fair price for a rare card of an historic figure. For comparison, a PSA 4 of a different variety of 1922 Exhibits of Hall of Famer Rogers Hornsby recently sold for around $450. A raw Exhibits copy sold for just $40 in 2018, while an SGC 4 sold for $190 back in 2017.

Yellow Horse, like Sockalexis, battled his demons as well. He dealt with arm injuries, one of which was reportedly caused by falling while inebriated. With minor league baseball his only hope at playing, he went to the Pacific Coast League to play for Sacramento in 1923 and 1925-26, along with Fort Worth in 1924. Here again, collectors got lucky: 1923 and 1924 saw the famous Zeenuts issues in the PCL, a wide-ranging minor league issue that featured some former — and future — Major Leaguers. Yellow Horse’s Zeenuts cards, like most from the series, are tough to come by. There’s a graded example with paper loss on the front currently available on eBay for $575.

If you get tired of waiting for one of these rarities to pop up, or if you don’t want to spend that much cash on a player with a fairly barren stat line, there are some options for you. Amazingly, despite his claim to fame as the first full-blooded Native American player, no card company has produced a Moses Yellow Horse card since 1924. However, Helmar, a company that makes beautiful art/fantasy cards, has released a few of Yellow Horse, and they pop up from time to time. For Sockalexis fans, there are two issues including him: 2003 Topps 205 and 2010 Tristar Obak. Each release has a bunch of parallels, so there are quite a few cards to chase. In addition, Helmar made cards of Sockalexis as well. Whether it’s a modern card, a vintage card, or an art card not created by a major company, you can’t go wrong having something with either of these historic men in your collection.