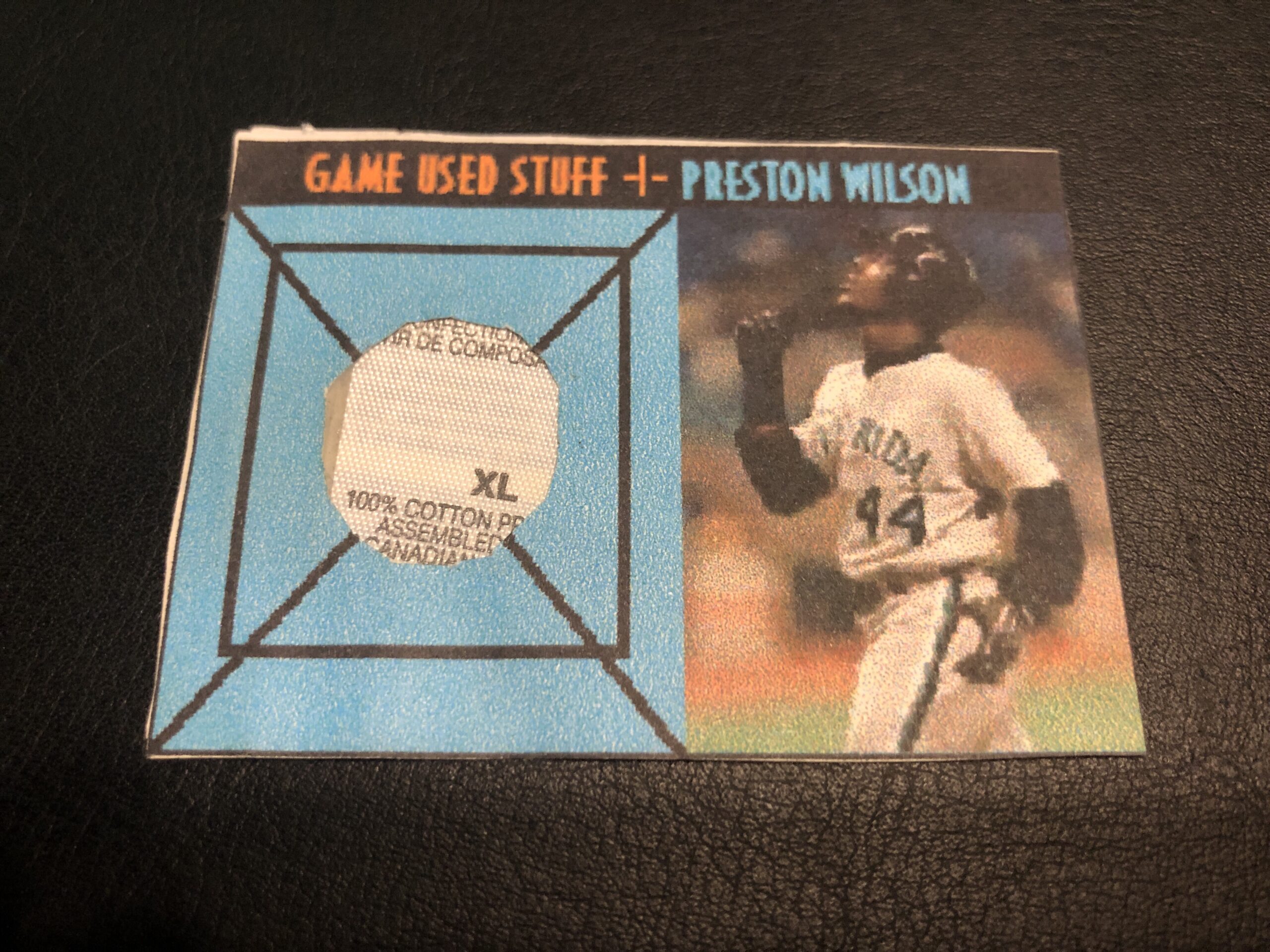 My parents, who retired last year, recently had the “get your stuff out of our garage” talk with me. It’s a dreaded moment in the life of any hoarder — I mean, collector — and though I knew it was coming, it still hit me like a ton of bricks. Much of what is accumulated there is going to be sold, but there’s plenty of it that is too steeped in memories to end up anywhere but my garage, where it will likely live for the rest of eternity.

A large part of that second group is my childhood baseball card collection. This represents a large issue for me: I have both the memory of beginning my collection, meaning all cards in those early boxes are sacred to me, AND I have the memory of certain specific cards, meaning I’d like to pull all of those out before figuring out what to do with the others.

I started going through some unmarked boxes I didn’t recognize last week — a good sign, one that means these cards aren’t part of a large-scale memory and only ones that may hold some individual sentimental value to me. I found cards I didn’t remember I had, cards I didn’t know I had, and cards I didn’t even know how I had acquired.

Then I found a true relic card. And then a second. These weren’t just relic cards, they were relics of the past, and I had forgotten about them.

Around 1998, I got my first computer in my bedroom. My family had one in the kitchen, but with my dad and I both intent on spending as many hours staring at the screen as possible, a second computer was a natural conclusion. I spent much of my time on my computer chatting with my friends on AOL Instant Messenger, and plenty of sleepless hours at night playing a game called Acrophobia with strangers across the globe. But I also loved MS Paint. 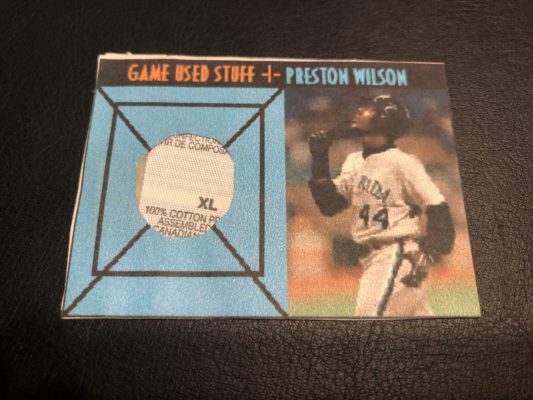 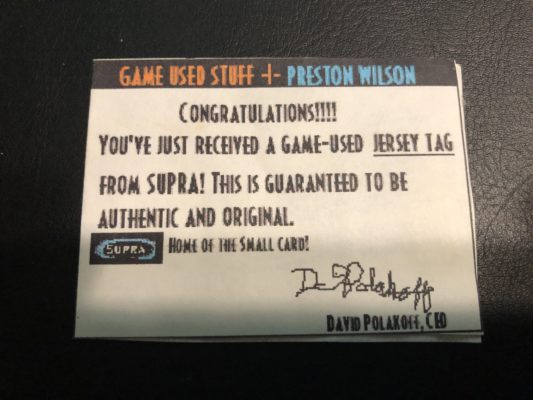 One day around 1999, while messing around in MS Paint, I decided to try to create my own baseball card. I held a baseball card up to the screen and drew a rectangle around its border. I somehow landed on the name “Supra,” for which I designed a logo. Then I designed a card mock-up, and printed it. Imagine my surprise when I discovered it was smaller than a normal baseball card. But my disappointment in the size was offset by the fact that it looked pretty good.

I decided that my card company needed an insert set. Relic cards were the hottest thing in the hobby, and at this point I only had 3 or 4 in my collection. So, why not create my own? I didn’t have any ACTUAL game used relics, and I didn’t want to destroy any of my real clothing, so I cut a tag out of one of my shirts and designed a “laundry tag” relic card. To my knowledge, no laundry tag relic card previously existed.

It was a forgone conclusion that the player on the card would be a Marlin, but which one? I find it funny in retrospect that I didn’t choose my favorite player, Mark Kotsay, but I know exactly why I didn’t: in those days, relic cards were reserved for great players. So, I landed on Preston Wilson. He wasn’t my favorite player, but he was the best Marlins regular at the time. I affixed a pre-printed Signature to the back of the card, like Upper Deck’s Richard McWilliam did. I also added a slogan — “Home of the small card!” — which was intended to play off the card’s diminutive size. 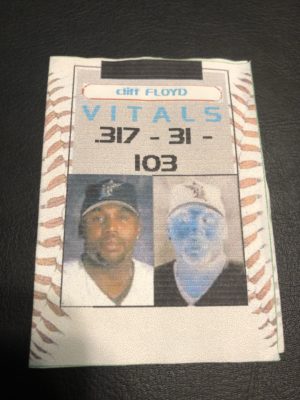 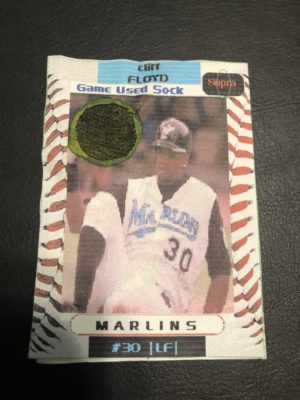 Some time later, I went to put on a pair of socks and noticed a hole. As I was getting ready to chuck them in the trash, I had a thought — why not make another relic card? I cut a piece of the sock out and sat back down at my computer. This time I was determined to make a full-sized card and settled on a new player: Cliff Floyd. I played around with the settings until I found the one that changed pixels into inches. Then I created a 2.5” by 3.5” rectangle and got to designing. I got a little fancier this time and added a baseball background. (This also helps me date the card to after 2000, not 1999, as the design was clearly influenced by 2000 Upper Deck Ovation.) I also added images and stats to the back. (The stats help me date the card to after the 2001 season. What a waste of investigative work I did two sentences ago.) Because the card was now full-sized, my slogan was gone, but I did create a new logo for my product.

I obviously didn’t have a future in graphic design, but I did have a future in baseball card collecting. Fortunately, Young Me shoved these cards in a box at some point for Future Me to discover. I had totally forgotten I had ever created these cards until I rediscovered them digging through a box. The relics on the cards were never real, but they really are relic cards.