In the midst of a global pandemic, new card releases have essentially come screeching to a halt. With most release dates pushed back, one product came out of nowhere to give collectors, prospectors, and breakers something to enjoy: 2020 Bowman 1st Edition. The hype it has caused on forums around the internet has been unreal, and the prices realized for some prospect cards have been astronomical. I’m here to tell you first-hand that the hype is well-deserved and worth it.

When the product was first announced, I didn’t pay much mind to it; I’m not generally a huge fan of online-only products. Only then I found out this was no ordinary online-only release: hobby shops would receive shipments as well. I logged on and tried to buy some packs from Topps but wasn’t able to do so before supply dried up. When the product was live and singles started appearing online, I was wowed at what I saw.
Because this product was previously unannounced and was printed during the pandemic, I assumed that the cards would simply be the standard Bowman issues with a foil “1st Edition” stamp on them. That’s how Topps has done the 1st Edition line in the past, though the line has been discontinued for the better part of a decade and a half. I was dead wrong, though: the logo was a part of the card, printed on the card stock in the same way the player’s photo is. This represented a huge turning point in my opinion of the product. This wasn’t a parallel created out of thin air by Topps. This was an entirely new product line.
I was able to get my hands on two packs and see for myself. The cards (like all Bowman!) are exciting. Besides vintage, Bowman is really the only thing I collect. I feel the same way about Bowman prospects as I do about vintage players — I get to read the backs, examine the stats and bios, and learn about players I might not otherwise know a lot about. As odd as it may sound, one thing that sort of blew me away was the condition of the cards. Even new releases typically have some centering issues, minor corner wear, and so on, but none of the cards in my two packs exhibited these issues, and I haven’t seen any condition issues of cards online, either. I’m not sure if that’s a byproduct of the digital printing process as opposed to the traditional one, but it stood out to me. 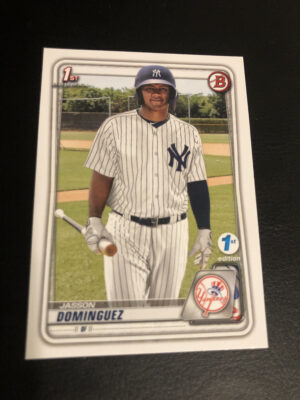 The real star of the product, in my opinion, is the foil. Bowman typically does not have foil parallels, but in this product, those are the only parallels. There are different colors of foil: an unnumbered sky blue, blue #/150, yellow #/75, gold #/50, orange #/25, red #/5, and platinum #/1. (Because this product was digitally printed, there are no printing plates, meaning there really is just one 1/1 of each player.) I didn’t get to see any of the color parallels, but I did get a sky blue foil of Yankees prospect Anthony Volpe in my first pack. I was incredibly impressed at a few aspects of the foil card. First and foremost, the borders have the 1st Edition logo printed in them. That’s a really neat tactic I’ve never seen before and only serves to reinforce now and forever that these weren’t just parallels but truly a separate product altogether. Additionally, as I mentioned before, I was impressed at the condition of these foil cards. Lots of times on both Topps and Panini products, foil cards exhibit some level of peeling or bubbling or chipping. Not so with these.
My second pack yielded the biggest name of the product, Jasson Dominguez. The Yankees international free agent has yet to play a professional game, but his base card is fetching triple digits online. If he makes it big, this is certain to become his most iconic card, with a great pose on the front and his nickname of “The Martian” on the back.
Long-term, I honestly believe this product is worth the inflated secondary market prices we’re seeing now, and that’s not something I generally say about aftermarket mark-ups. This product has a ton of 1st Bowman cards, as well as cards of up-and-coming stars like Wander Franco and Luis Robert who have a track record of selling well. But the biggest wild card is the autograph insertion. No autograph checklist was released, and already autos of the two biggest stars in the product, Dominguez and Oakland Athletics youngster Robert Puason, have been pulled. Because the autographs are pulled from the Chrome Bowman release and stamped (unlike the base cards), there have also been RCs of guys like Aristides Aquino, who does not have a base card in this product.  As time goes on and different players featured in this product get hot, unopened packs or boxes will be extremely valuable because of the allure of not only the rookies and parallels, but the possibility of an autograph. Without the knowledge of who the autographs are of, curiosity will drive this product for eternity. If you can get your hands on some, I suggest it.
baseball cardsinside the packbaseball

Leave a Reply to David POLAKOFF